In 2013-2014 the Studio had the privilege of conserving a wonderful tapestry map owned by the Oxford University Bodleian Library. It now hangs in pride of place at the Blackwell Hall in the newly opened Weston Building where it can be viewed by the visiting public.

Depicting the county of Worcestershire, the tapestry is in three fragments. It was woven in England c1590, for Ralph Sheldon to hang in his house in Long Compton, Warwickshire, as part of a set of four tapestries depicting different counties. It is one of a set of three map tapestries, (Oxfordshire and Gloucestershire, also in fragments) owned by University of Oxford and a fourth tapestry (Warwickshire) in the set owned by Warwickshire Museum Service.

The designs for the maps are from the Christopher Saxton county surveys, published as an Atlas in 1579. A number of the Saxton maps would have been used for each of the tapestry maps and extra details were also added to the tapestries in the scaling up process.

Not only is the Worcestershire tapestry in three pieces but it is incomplete. The whole of the top and right borders and about a quarter of the map on the right side are missing. It is estimated that the original size could have been approx 430cm h x 680cm w. However despite these losses, the brightness of the colours and the sheer skill of the weavers really shine through and make it a joy to behold.

Conservation work on the Worcestershire tapestry began in July 2013 at the Textile Conservation Studio. Here it was examined, documented and prepared for wet cleaning before sending to De Wit Manufacturers, Mechelen, Belgium for washing.

Before conservation the three large fragments of Worcestershire had previously been stitched to a backing fabric of beige, coarse woven, linen. Most of this was removed before washing. The tapestry was surface cleaned front and back using adjustable suction museum vacuum cleaners.

Thread samples were taken for dye analysis, the results of which will be known later.

After initial Studio work the tapestry was rolled and packed for delivery to De Wit Manufacturers where it was wet cleaned.

The tapestry appeared much brighter and stronger to the touch after cleaning.

In many ways the conservation treatment was not at all a usual one for a large scale tapestry. This is primarily because the tapestry is not a whole piece and there are large missing areas.

During the time spent documenting and becoming familiar with the object it became apparent that an alternative approach needed to be considered.

A meeting was held with Bodleian staff where all options were discussed and decisions were made about the treatment approach.

After careful consideration it was decided that the tapestry be mounted directly onto the mounting fabric and not as is usual, first onto a linen scrim. In this way only one layer of new material would be added, and the method would mean only one set of stitches would be placed through the object and the mounting fabric.

In consultation a mount fabric was chosen, looking at fabric samples in different lighting set ups, viewed from a height and in both flat and hanging positions. A green colour provided a sympathetic background tone that allowed the map fragments to come to the fore. The green was also preferred because it referred to green fields rather than desert lands that the previous beige/brown colour of the backing suggested!

A ready dyed, green, ribbed fabric from Création Baumann’s (Indiana II) was chosen. After discussion with the Bodleian staff, it was decided that the fabric should be used with horizontal seams. In this way no seams would be visible across the large missing area between the top and lower fragment. The rib effect however would not be running with the weave of the tapestry, but the decision taken was an agreed compromise which avoided having the seams run in a vertical direction.

Working on the Studio’s two tiered table tops, the seamed mounting fabric was laid face up. The tapestry fragments were then unrolled and positioned on top. After placing tacking lines through the fragments only, following a warp, the position of each fragment on the backing fabric was fine tuned.

The central horizontal split through the large tapestry fragment, was felt to need adjustment in order to allow for the missing warps.

Measuring between the warp lines to set placement

After tacking the fragments in place the tapestry was attached to a frame roller and then set up on a frame.

Rolling the mounted tapestry onto the frame roller for stitching

Once on the frame the tapestry was put in a slung position rather than under any tension as the mount fabric had been applied flat. Conservation stitching was worked in 20cm sections. All the grid stitches in these sections were worked through a template that had been created. These grid stitches will give an overall structural support to the tapestry. Long or broken slit stitches were also restitched using a cotton covered polyester thread.

The tapestry on the frame

Conservators at the frame

Using laid warps over dyed wool patches the place names were completed. The original Saxton maps were referred to and tracings of other letters in the tapestry used as templates to replace missing letters. It was also agreed that lettering elsewhere on the map was to be stitched with dark brown wool where original weft threads were broken or loose ensuring that the lettering could be clearly read.

Placement of the grid stitch template on an upcoming section

Long and short stitches or laid and couched threads using a fine cotton covered polyester thread were worked around all the damaged edges of the tapestry fragments, providing localised support.

Before and after oversewing and laid couching the fragmented edges.

After all stitching had been completed the tapestry was taken off the frame before lining and attaching Velcro™ on cotton webbing tape to the reverse at the top and side edges.

An additional length of Velcro™ was stitched to the top of the central fragment to help keep the tension in the green support fabric and prevent any stretching.

Finally, last week, the tapestry was installed in its new case in front of a watching crowd including press and film crews. No pressure then!

If you want to see the tapestry in the flesh and under new lighting then we urge you to visit the Weston Library. 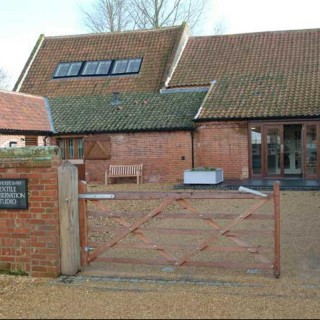 This is the official National Trust Textile Conservation Studio's Blog. We hope to give you a behind the scenes insight into the specialist world of textile conservation.